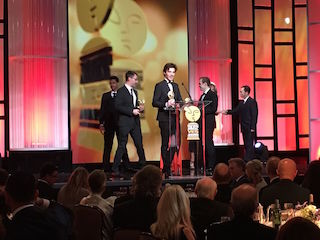 Rodeo FX won three Visual Effects Society Awards for its work on Game of Thrones at the 15th VES Awards ceremony in Los Angeles. The awards honored the studio’s work on Battle of the Bastards, the ninth and most memorable episode of season six.

The team at Rodeo FX tackled the destruction of ships in the harbor during the Meereen battle scene. This was a huge undertaking as the ships are being destroyed by flying dragons emitting enormous plumes of fire, shattering the boats and boiling the water underneath. The destruction of the ships and the performance of the fire were done in a deliberate way across the various shots as we see it from different angles during the sequence. Simulated sails, water, fire, and digital doubles actors jumping off the ships completed the scene.

Battle of the Bastards culminates in the attack on Meereen from a host of ships in the harbor. In addition to the fully CG city – including all buildings and props that were modeled individually – Rodeo FX simulated flaming cannonballs catapulted into Meereen’s buildings and created CG smoke, particles, water, and fire.

“The artists work really hard on delivering high-quality visual effects on all projects, and I’m delighted it’s being recognized by the industry,” said Sébastien Moreau, president of Rodeo FX. “These awards will no doubt drive the team working on season seven of Game of Thrones to push the limits even more.”