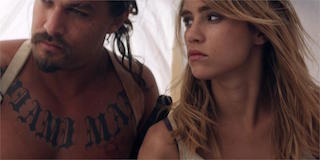 Screen Media Films acquired the U.S. rights for Ana Lily Amirpour’s The Bad Batch following an all-night bidding session prior to its North American premiere at the 2016 Toronto International Film Festival. The news followed the movie’s Special Jury Prize at the Venice Film Festival, where it had its world premiere.

Screen Media will release The Bad Batch in theaters early in 2017 and will also play at Fantastic Fest later this month.

“We’ve been impressed with Lily as a filmmaker ever since her first film and were blown away by her vision for The Bad Batch. We couldn’t pass up the chance to work with her, Annapurna and Vice,” said Seth Needle, senior vice president, worldwide acquisitions, at Screen Media Films.

"We couldn't be more excited about Seth and Tom's passion for Lily's beautifully freaky vision,” added Vicw’s executive creative director Danny Gabai. “She's created a film that's unlike anything else out there, and we can't wait to get The Bad Batch on the big screen so we can start making people's brains hurt."

“The Bad Batch is truly a cinematic experience, which needs to be seen on the big screen,” said Amirpour. “It just won’t be the same on a small scale and I’m excited to release it with Screen Media who totally gets that.”

The Bad Batch was produced by Sina Sayyah and Danny Gabai, co-produced by Sammy Scher, executive produced by Megan Ellison, Eddy Moretti, and Shane Smith, with cinematography by Lyle Vincent, sound by Chris Terhune, editing by Alex O’Flinn, and production design by Brandon Tonner-Connolly. The production companies are Annapurna Pictures and Vice.