Turn it Around Premieres 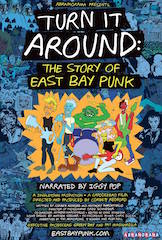 Turn it Around: The Story of East Bay Punk, the new documentary directed and produced by Corbett Redford and executive produced by Green Day is having its world premiere as the opening night film of the 16th San Francisco DocFest May 31 followed by an initial one week theatrical run at the Alamo Drafthouse Cinema in San Francisco starting June 2.

The hometown opening will be followed by screenings in cities across the country in tandem with Green Day’s Revolution Radio World Tour, with the theatrical campaign launching in New York City in late July and culminating in Los Angeles in mid-September.  In a unique release strategy, Turn it Around: The Story of East Bay Punk will tour with the band enabling theatres to be marketing partners with Green Day in promoting the film’s theatrical release and the band’s nationwide tour.

Narrated by Iggy Pop, Turn it Around: The Story of East Bay Punk spans over 30 years of the California Bay Area’s punk music history with a central focus on the emergence of Berkeley's inspiring 924 Gilman Street music collective.

The film is the definitive telling of this vibrant story, drawing from a wide variety of voices featuring exclusive interviews with and the music of the most famous and infamous rock and punk bands in history including Green Day, Metallica, Rancid, Dead Kennedys, and over 100 more interviews with artists and musicians from California’s East Bay punk music scene.

“Turn it Around gave us the opportunity to tell the story of the East Bay punk rock scene, a scene that’s a sacred thing to me, Mike and Tré and to a lot of others who were there at the founding and who helped to shape the genre,” said Green Day frontman Billie Joe Armstrong.  “We’re proud to bring the history of this movement to the world and hope the film inspires people to create their own music and to build an artistic community."

Abramorama’s West Coast head of acquisitions and business development Evan Saxon and executive vice president and CCO Karol Martesko-Fenster added, “The timing to bring this film out is perfect as there has been great response and interest in Turn It Around: The Story of East Bay Punk.  Working closely with the band and their management we’ve structured a unique distribution strategy that integrates the benefits of a theatrical campaign with a massive U.S. concert tour.”