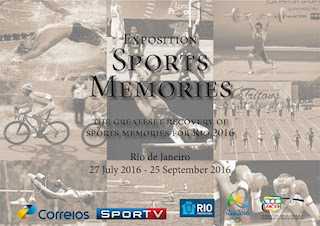 WCP is being used to ingest, manage and distribute both the exposition’s historical media and the festival submissions.

Sports Memories: Rio 2016 is part of the FICTS World Challenge, a travelling sports media festival and competition held annually in 19 locations around the globe. The exposition event in Brazil, produced by Guanabara Filmes, will feature films, documentaries, television programs, news footage and other media in three categories: History of World Sport, History of Brazilian Sport and the 2016 Olympics in Rio. The event will also include a screening room where the public will be able to watch live events in the Olympic and Paralympic games on 16 HD channels.

“The expo takes people on a trip through time from the beginning of the Olympics in antiquity through the modern era,” says FICTS president Franco Ascani. “It will include, for the first time ever in Brazil, sports footage filmed by the Lumière Brothers in 1896, as well as Leni Riefenstahl’s images of the 1936 Berlin Olympics, the participation of Brazilian athletes in the Olympics, and the beginning of the Paralympics in Rome in 1960.”  Assets from the exposition will be available for use by the other 22 institutions in the Olympic Museum Network worldwide.

Submissions to the festival come from producers, broadcasters, libraries and other sources worldwide. “WCP makes the submission process very easy,” explains WCPMedia Services vice president of operations Giovanni Contri. “The process of ingesting, transcoding, distributing and managing very large files is simple and transparent, regardless of the original format. And it’s fully secure: media are stored on servers with security on par with Swiss banks. The expo organizers are in complete control over access the media assets. Last but not least, it includes an embedded flexible screening room that provides a controlled environment for promoting assets.”

Since 2014, FICTS has relied on WCPMedia Services to support processes for all its events. This partnership has been reconfirmed for the 2016 FICTS Festivals, a circuit of 19 sports media festivals held in cities around the globe. The best work from the local festivals will be selected for inclusion in World FICTS Challenge slated for November 15-20 in Milan. A worldwide audience of more than three million people is expected to attend the festivals.