The National Association of Theatre Owners will honor Ellis Jacob, president, and CEO of Cineplex, with the 2022 NATO Marquee Award during this year’s CinemaCon. Mitch Neuhauser managing director of CinemaCon made the announcement. Jacob is being recognized by NATO for his unequalled dedication, commitment, and service to the motion picture theatre industry. 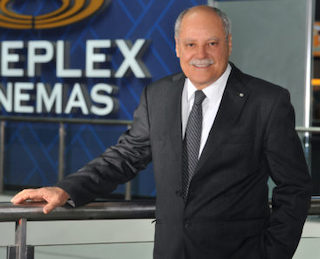 “Ellis Jacob is quite simply a marvelous human being,” said NATO president and CEO John Fithian. “He provided steady and insightful leadership as NATO chairman as the industry descended into the depths of the pandemic, and I continue to rely on his wise counsel. His dedication to his company and this industry is unmatched. That dedication is paired with a kindness and courtesy that is rare and is a hallmark of his career.”

Rolando Rodriguez, NATO chairman and chairman, president and CEO of Marcus Theatres said, “Ellis Jacob, while running his own company, dedicated countless hours to guiding the industry through our deepest crisis. It is impossible to overstate his contribution to NATO and his leadership. As his successor as NATO chairman during the worst of the pandemic, I know firsthand what that leadership meant to the industry and to me. We are stronger because of him.”

Jacob’s 35 years of leadership in the motion picture exhibition industry has transformed the movie-going experience for Canadians. In addition to serving as Cineplex’s president and CEO, Jacob serves as a member of the board of directors of Cineplex Inc., Toronto’s Baycrest Centre for Geriatrics, the Movie Theatre Association of Canada, ASM Global and Boat Rocker Media. He is a former chairman of the National Association of Theatre Owners and currently serves on its executive board. In addition, he serves as an executive committee member of the Global Cinema Federation and a founding director of the Canadian Children’s Literacy Foundation.

In 2019 Jacob’s received the ICTA Global Cinema Innovation Award, was recognized in 2014 as Waterstone Capital’s Most Admired CEO in the Enterprise Category and in 2013 was awarded the Most Innovative CEO from Canadian Business Magazine. Most recently in 2021, Jacob was appointed to the Order of Ontario after previously being appointed to the Order of Canada in 2010, for his contributions to the entertainment and movie exhibition industry along with his voluntary and philanthropic endeavors

CinemaCon will be held April 25-28 at Caesars Palace in Las Vegas.