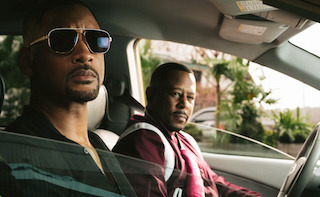 Seventeen years after Bad Boys ll, the Bad Boys Mike Lowrey (Will Smith) and Marcus Burnett (Martin Lawrence) teamed up again for one last ride in Sony Pictures’ worldwide box office hit, Bad Boys for Life. Car chases, gun battles, explosions and other forms of mayhem—all requiring robust sound treatment—occur throughout the film, but the story is driven by the hilarious bad-boy banter between Mike and Marcus. Capitalizing on every twist and turn of the action sequences while allowing the humor to punch through was a challenge for the sound artists.

“This was a wonderful project from the perspective of sound,” says Ticknor “It was an opportunity to work with one of the most successful producers in Hollywood, Jerry Bruckheimer, a talented, young directing team and two of today’s most gifted actors. We had a great sound team, who were motivated to deliver results that would thrill the audience and have them laughing at the same time.”

Some of the film’s most exciting action scenes occur with Mike behind the wheel of a metallic blue Porsche 911 Carrera 4S. In order to support the car with authentic sound, Ticknor and Lamberti took an identical vehicle out to a small airport in the California desert to record its engine, tires and other features as a professional driver duplicated maneuvers pictured on screen.

“The Porsche was no ordinary car; it could go from zero to 60 in three seconds,” says Ticknor. “We placed microphones on the car and in its engine compartment, and recorded it spinning, driving in reverse and blazing across the airport tarmac at speeds up to 190 miles per hour.” 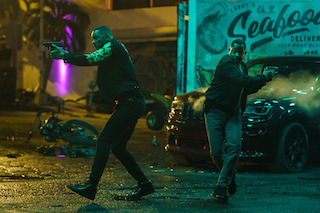 The crew also made detailed recordings of a Harley Davidson motorcycle featured in the film.

Similar attention to realism was applied to guns and other props. The sound team gathered recordings of the actual weapons featured in the film, which included Glock and Beretta handguns, a variety of machine guns and submachine guns, rifles, shotguns and a missile launcher. In one particularly fierce gun battle, the action descends to slow motion. “The scene begins in a garage and develops into a motorcycle chase,” says Lamberti. “We took gun sounds, pitched them down, slowed them and layered them over one another. In this film, there is never just one gun; there are always multiple guns. They are layered and pitched differently to create density and space.”

During the final mix (completed in Dolby Atmos in Sony Pictures’ Cary Grant Theater), gunfire was spread across 360-degree space to give the audience the sense of being in the middle of a fire fight. “At the end of the film, there’s a gun battle in an old hotel; Mike and Marcus are pinned down with bad guys firing from all sides,” Lamberti recalls. “We used the Atmos environment to wrap the audience in sound, placing each specific gun in its correct spatial relation to the camera. Bullets are whizzing by, impacting and ricocheting. You feel that you, too, are pinned down.”

One of the film’s most electrifying moments occurs when an out-of-control helicopter crashes through the skylight of an old mansion.  The scene follows the helicopter as it falls and chaos erupts around it. “We wanted the focus to stay on what was happening with the helicopter,” explains Kossayan. “The concept was to hear the engine breaking up, the turbine choking and the blades losing rhythm and speed. We added to that time-warping sound processing to convey the idea of dysfunction. It begins with organic sound and transforms into something unique. When it was woven into the rest of the sound design—breaking glass and masonry, pillars cracking and fire breaking out—the result is very powerful.” 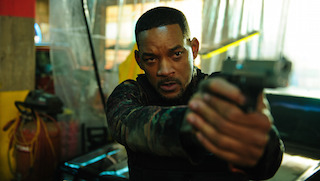 During gun battles and other action scenes, Mike and Marcus carry on a teasing repartee. DeCristofaro notes that the sound editors’ task was to ensure that all their dialogue sounded clear and natural, while maintaining the surrounding chaos. “They tell jokes during gun fights, while racing down the street on a motorcycle and when a helicopter crashes through a building over their heads,” he says. “You need to hear what they’re saying even as explosions are happening, metal is impacting and bullets are popping.”

The trick to pulling that off, DeCristofaro adds, is in knowing what to leave out. “You need to delineate things so that you hear what you are supposed to hear at the right time,” he explains. “Some of the background sound is blurred out as you focus the audience’s attention on what’s important. A helicopter may be crashing in the background, but if we included every detail in the sound, it would lead to cacophony.

Sound editors also worked hard to get the most from production dialogue tracks, including those from intense action scenes that were recorded in challenging, noisy environments. The filmmakers wanted to use as much original dialogue as possible to preserve the spontaneity of the actors’ performances. “Dialogue is the most important sound element in the film,” says Ticknor. “So, it’s essential that every word be clear.”

“The chemistry between Will Smith and Martin Lawrence was wonderful, but very difficult to recreate offline,” DeCristofaro adds. “The sound editors and mixers did an incredible job in cleaning the tracks and removing background noise and artifacts to maintain the integrity of those performances.”

The production dialogue was supplemented with ADR and loop recordings for background voices, crowd scenes and instances where the original sound could not be used. “We had a lot of fun with the gunfight scenes, especially the last big shootout,” says Sullivan. “Will and Martin improvised a lot as they were trying to escape while being shot at and chased by a helicopter. They’re so good at that and it really added to the comedy.”

The sound team logged long hours in the last weeks of post-production to get the film ready for release. The extra effort, says Ticknor, is apparent in the results. “It’s what we’re trained to do,” he says. “And it’s also what we love. We take a lot of pride in this movie and the work we did to contribute to its success.”