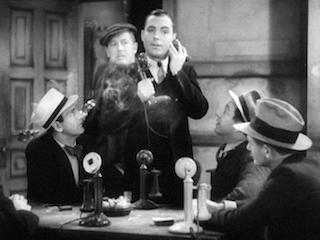 The restored film made its world premiere at the Montclair Film Festival in New Jersey followed by its European premiere at Il Cinema Ritrovato in Bologna, Italy. It also screened at the Academy of Motion Picture Arts & Sciences’ Samuel Goldwyn Theater in Beverly Hills. The restoration team made a technical presentation on the work at the recent The Reel Thing symposium in Los Angeles.

Based on the 1928 Broadway hit, The Front Page centers on a tough-talking Chicago newspaper reporter covering the escape of a condemned criminal. The film stars Adolphe Menjou, Pat O’Brien and Mary Brian, and picked up Oscar nominations for Best Picture, Best Director and Best Actor.

The source element used for the restoration was a black & white composite print of the film’s U.S. version discovered in the University of Nevada Las Vegas’s Howard Hughes Collection. The print was produced in the 1970s from the now lost original camera negative. Pogorzelski and Linville compared the print to surviving copies of an alternate European version and noted significant differences in action, dialogue and camera placement throughout. The U.S. version has not been seen in decades.

Restoration began with 4K wet-gate scanning of the complete 35mm print at ImagePro, Burbank. The scanned elements then underwent several stages of automated and customized restoration at MTI Film’s facilities in Hollywood and Tianjin, China, using its proprietary DRS Nova technology. Although the source elements were in generally good condition, a number of significant issues required close attention. “Parts of the film were affected by chemical staining and mold,” notes Jim Hannafin, MTI Film senior vice president for business development. “One reel, in particular, was affected in its entirety.”

MTI Film restoration artists employed a variety of newly developed DRS Nova features to address the staining issue as well as problems with flicker and warping. “We used all the tools in our toolbox, and did so in unconventional and creative ways,” explains director of restoration and preservation Bridgid O'Donnell-Farquhar. “Our grain management tool allowed us to analyze and replicate the grain pattern of the original film elements. We used that to mute much of the fungus and mold staining. Simultaneously, we replaced the grain in a manner identical to what it once was. We were very pleased with the results.”

The film also went through complete color grading and remastering. Colorist Alex Chernoff notes that the aim was to create a consistent look that was as close as possible to what moviegoers experienced in 1931. “With films from this period, it can be a challenge to get the black levels and density right without losing detail,” Chernoff says. “Some of the scenes in the newspaper offices were especially tricky due to the light level and the complexity of the environment.” The re-mastering process included the production of a new 4K film negative for archiving at Universal Studios’ UDS facility.

As a result of the team’s effort, a neglected classic of American cinema can now be enjoyed by a new generation of film lovers. “Working on films like this engages our sense of pride,” O'Donnell-Farquhar says. “This one became a passion project for our whole team because it was such a great film—and it shows in the end product.”