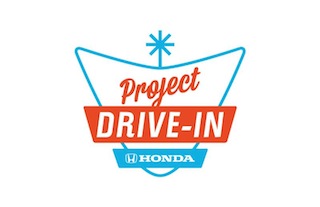 Based on the overwhelming response from fans and communities across the country for Project Drive-In, Honda is adding four more digital cinema projectors to its national effort to save drive-ins facing closure due to the end of 35mm film distribution.  This brings to nine the total number of drive-in theaters aided by the program. Voters can continue to visit www.projectdrivein.com to help determine which of the remaining 116 participating drive-ins, will be awarded one of the four additional digital cinema projectors. 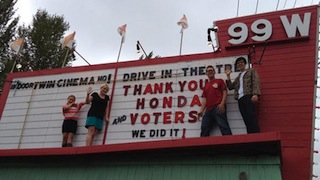 As 35mm film distribution comes to a close at the end of this year, hundreds of additional drive-in theaters risk potential closure because of the costly switch to digital projection, estimated at $75,000-plus per screen. Project Drive-In launched on August 9 by Honda to raise community awareness of the plight of drive-ins, awards digital projectors to drive-ins and to provide simple ways for people to get involved in an effort to ensure that this historic part of American cinema and car culture continues to lives on.

Visitors to the Project Drive-In website are encouraged to share information about the program with family and friends via social media, email or texts, pledge to see one movie at their local drive-in. Those who strive to show their support can visit www.projectdrivein.com to contribute to the national save-the-drive-in fund to help keep more drive-ins in business.

All winning theaters will host a celebration that includes a special screening of Sony Pictures Animation's Cloudy with a Chance of Meatballs 2, in theaters everywhere on September 27.

"The emotional reactions we received from the first five winning drive-ins helped us realize the real world impact Project Drive-In is having on these small businesses and their surrounding communities," said Alicia Jones, manager of Honda & Acura social marketing at American Honda Motor Co. "With such widespread participation by communities across the nation, we are honored to increase our support of even more drive-in theaters and continue to rally the public to help keep the spirit and experience of drive-ins alive and well for years to come."