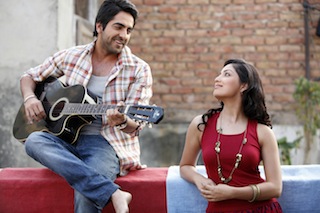 In its hundredth year, Indian cinema looks young, fit and with it. To understand this, all you have to do is watch Kai Po Che, Vicky Donor or Peepli Live in Hindi. Or watch any other small or medium budget successful film in an Indian language of your choice. Take Kai Po Che for example.

It is a warm, funny and yet upset­ting look at the lives of three friends and their coming of age. It is set against the background of the Bhuj earthquake of 2001 and the Gujarat riots of 2002. It doesn’t make any political statement. It simply tells the story of three friends trying to live their lives at that time. The film, produced by Disney UTV on a budget of Rs 300 million, did exceptionally well at the box office. The film has a completely unknown cast and crew. And yet they are clearly talented.

The last five years have seen an avalanche of talent coming out of the woodwork and into the Indian film industry—directors, actors, writers and musicians among hundreds of others. You never heard of them and yet they are creating some good and successful films. Kai Po Che is just one among them. Vicky Donor and Peepli Live among dozens of others, use a largely unknown cast and crew to tell an unusual story. They are perhaps the best examples of all that is going right with the Indian film business in its hundredth year of existence.

It is now becoming a creative hot spot where filmmakers and writers are telling their own stories with a confidence and pa­nache that didn’t exist 20 years ago. These may be urban stories, rural stories, stories about housewives or construction workers or just intellectual meanderings. But the strange thing is that these stories are being told, they are being sold and, more often than not, they are finding buyers.

Much of this creative unleashing has happened because the business has delivered. And that is the point that Kai Po Che or any of the other films illustrate. In 1983, an unknown director called Shekhar Kapoor made a film called Masoom. Another un­known called Mahesh Bhatt made Saaransh, another wonderful film. Both of them were great pieces of work but they had a tough time getting money, backing or distribution.

What has changed between then and now is that studios such as Eros, Disney UTV and Yashraj are pushing these films with a distribution and marketing muscle that was unheard of in the ‘80s. Large chains such as PVR or Inox and thousands of digital screens are happy to screen them.

What has changed is that India is no longer a one-size-fits-all Sholay market. It is a market for many different kinds of films, all of which are managing to find their audience though multiplexes or single screens, on TV, online and even on the mobile. Its volumes and heterogeneity are much better represented in the variety of films coming out than on the programming served on TV. And what has changed is that this market is delivering steadier returns than it ever did. It is hard to imagine that this business was a basket case just a dozen years ago. Clearly, the Indian film industry has learnt the lesson of its bad years and learnt it well. It has cleaned up its act spectacularly. The two big challenges now—size and profitabil­ity—are evolutionary rather than structural.

On size, the gleaming new companies are as yet small—the largest, Disney UTV, is close to Rs 4 billion in revenues. The larg­est media group, Times, clocked revenues of just over Rs 67 billion in March, 2013. That makes it roughly six times the size of the entire Indian film industry. So, film has a long way to go.

On revenues and profitability, India looks particularly bad be­cause it is the largest filmmaking country in the world. In 2012, for instance, the thousand-or-so movies made in India led to the sale of over three billion tickets for about Rs 85 billion in home box-of­fice revenues. Add other revenues—home video, satellite rights, overseas and so on—and Indian films made over Rs 112.4 billion from the content they generated. That is just over US$ 2 billion. Hollywood, on the other hand, released 677 films and generated US$ 10.8 billion from the sale of 1.36 billion tickets in the domestic market alone in 2012. The total revenue it gen­erated, including overseas and home video, was about US$ 40 billion.

You could argue that the size of the two economies and the purchasing power of its people are so different that it is silly to compare the two. And you would be right. The idea is not to put down the achievement of the Indian film industry but to point out that it has a long way to go before it makes the most of its prolific nature.

One part of the answer involved getting organized and attract­ing capital, both of which the industry has managed to do. Over the past five to seven years, it has been transformed beyond recognition into a regular business. The other part is pushing for growth—by increasing the reach of cinema, pushing up average ticket prices and expanding into markets within and beyond India. Many of the larger companies are now investing in distributing films abroad and in producing films in different Indian languages. Almost all of them have an online presence and are very conscious of its potential. So, the journeys that will make Indian film companies bigger, better and more profitable has begun.

Editors Note: Digital Cinema Report gratefully acknowledges that this article is excerpted from the book The Indian Media Business from Sage Publications India and is used by permission of the publisher.