Long Strange Trip in Theatres May 26 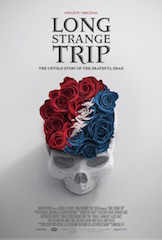 Amazon Studios and Abramorama are bringing Long Strange Trip, Amir Bar-Lev’s critically acclaimed documentary about the Grateful Dead, to theaters across the U.S. to give fans an opportunity to experience the documentary on the big screen prior to its New York and Los Angeles release on May 26. Following its release in theaters, the documentary will come exclusively to Amazon Prime Video on June 2.

Long Strange Trip marks the first time Amazon Original Movies and Amazon Original Series have partnered on an original project to be released in both theaters by Abramorama and on Prime.

Long Strange Trip was acquired by Amazon Studios ahead of its world premiere at the 2017 Sundance Film Festival. Directed by Bar-Lev and executive produced by Martin Scorsese, Long Strange Trip is the first full-length documentary to explore the fiercely independent vision, perpetual innovation, and uncompromising commitment to their audience that made the Bay Area band one of the most influential musical groups of their generation.

Artfully assembling candid interviews with the band, road crew, family members and notable Deadheads, Bar-Lev reveals the untold history of The Dead and the freewheeling psychedelic subculture that sprouted up around it. The film also provides poignant insight into the psyche of late lead guitarist Jerry Garcia, whose disdain for authority clashed with his de facto leadership of the sprawling collective that kept the show on the road.

With a soundtrack that captures some of the band’s most dynamic live performances, as well as unguarded offstage moments and never-before-seen interviews, footage and photos, Long Strange Trip explores The Dead’s singular experiment in radically eclectic music making.

Much more than the behind the music back story of an exceptionally talented and beloved group of musicians, the film is at once an inspiring tale of unfettered artistic expression, a heartfelt American tragedy and an incisive history of the rise and fall of 20th-century counterculture.

The official soundtrack to Long Strange Trip, featuring rare and unreleased Grateful Dead recordings, will be released by Rhino in conjunction with the documentary premiere and is available on Amazon Music.