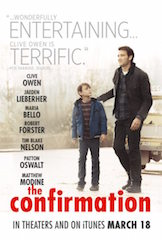 The New York Film Critics Series has partnered with independent cinemas to present live, in-theater events. The next NYFCS U.S. event on March 16 and 17 will be preview screenings of The Confirmation with on screen appearances by Clive Owen, Jaeden Lieberher, and writer director Bob Nelson (Nebraska).

Owen stars in this comedy about an estranged father and son, whose weekend adventure leads to something they never imagined: a true family connection. The film also stars Maria Bello, Robert Foster, Tim Blake Nelson, Patton Oswalt and Matthew Modine. The Confirmation is directed and written by Academy Award-Nominee Bob Nelson (Nebraska).

The evenings are moderated by Peter Travers, film critic for Rolling Stone Magazine and ABC’s Popcorn, along with additional coverage by Alison Bailes of BBC.com and WOR Radio. NYFCS offers screenings of movies before their theatrical release and presents interactive, big-screen HD broadcast with the stars and filmmakers

The movie is being distributed by Saban Films and will be released on March 18th nationwide and on demand.