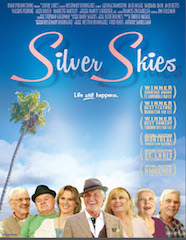 The New York Film Critics Series has partnered with many of the nation's leading independent cinemas to present live, in-theater events. The next NYFCS screening will be pre-release screenings of Silver Skies.

The movie is written and directed by Rosemary Rodriguez (The Good Wife, Acts of Worship) and executive produced by Oscar winner Fred Roos (The Godfather movies, Lost in Translation), Arthur Sarkissian (Rush Hour, While Your Were Sleeping) and Nestor Rodriguez (Acts of Worship). The event is hosted by Peter Bart (Variety Magazine, Former MGM & Paramount Executive, AMC'S Shoot Out).

Told with humor and compassion, Silver Skies chronicles the unexpected developments that occur when a group of eccentric seniors have their lives turned upside down by the sale of their beloved apartment complex.  A refreshingly original story about getting older and trying to hold tight to the American Dream.