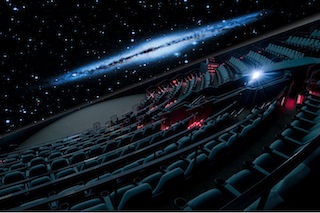 The Science Museum of Virginia, in Richmond will open its new dome theatre in early 2014. “The Science Museum will be opening up the full expanse of the cosmos to our guests - inviting everyone to explore the universe with us in a truly spectacular fashion, ” said Richard Conti, CEO/chief wonder officer.

“This is an historic occasion for E&S, as it was the Science Museum of Virginia that purchased the very first Digistar system from E&S in 1983 and later upgraded the system to Digistar II,” said Kirk Johnson, E&S vice president and general manager. “Our long-time customer, the Science Museum of Virginia will give visitors a state-of-the-art cinematic experience with the new E&S Digistar 5 system upgrade. In resolution, brightness and 3D quality, Digistar 5 represents a technical peak for digital dome theaters and planetariums that will become the gold standard others want to emulate.”

The upgrade will also include the re-skinning of Science Museum of Virginia’s existing 23 meter (75 foot) diameter dome with Spitz NanoSeam perforated aluminum panels matched so precisely edge-to-edge that they disappear under projection, and E&S’ auto alignment and auto blending technology to combine all five 4K projectors into a seamless full-dome image.

The Digistar 5 full-dome 3D system will include five 25,000-lumen DLP projectors at 4K resolution running at 120 Hz. The combined resolution of these projectors will produce more than 29 million pixels on the museum's giant 23-meter (75 foot) diameter dome, almost three times the resolution of a 4K full-dome theater, and over 14 times the resolution of HDTV.  This system will offer a brightness of 4 fL on the dome, currently the highest brightness ever projected in a giant screen digital full-dome theater.  The system meets and actually exceeds the Digital Immersive Giant Screen Specifications standards recently ratified by the Giant Screen Cinema Association for giant screen digital full-dome theaters.