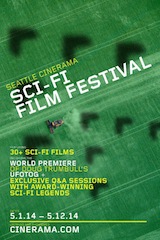 Paul G. Allen’s iconic Seattle Cinerama Theater has announced its second annual Science Fiction Festival, running May 1-12, with 12 days of special programming. The festival will be highlighted by the world premiere of Douglas Trumbull’s short film UFOTOG, along with screening of more than three-dozen of the science fiction genre's most beloved movies and celebrity appearances by Jonathan Frakes, Tom Skerritt and Sam J. Jones.

UFOTOG, a 12-minute science fiction adventure, was written and directed by Trumbull and demonstrates his new technical process, MAGI − a new cinematic language that invites the audience to experience a powerful immersion in the story that is not possible using conventional film standards. Christie Digital will provide a special digital projector to premiere the footage, which was captured in 4K 3D at 120 frames per second.

Trumbull is legendary for his ground-breaking visual effects work on films such as 2001: A Space Odyssey, Close Encounters of the Third Kind, and Blade Runner, as well as his directorial achievements on Silent Running and Brainstorm.

Seattle Cinerama is one of the few theaters in the nation that can still run all film formats (35mm, 70mm, DCP and Cinerama). The diverse line-up of festival films includes 2001: A Space Odyssey and War Of The Worlds (both refreshed and reprinted in 2012 courtesy of Allen); classics (Forbidden Planet, When Worlds Collide); cult favorites (Dune, A Clockwork Orange, Brazil); the iconic (Alien, 2001: A Space Odyssey, Close Encounters of the Third Kind); the rare (Logan's Run, Akira), and over 30 other titles.

Cinerama operator Greg Wood said, "This festival represents what is so special about Seattle Cinerama: we can bring 800 people together to honor classic films in a grand movie palace while also demonstrating the future of cinema with Douglas Trumbull’s world premiere of new technology."