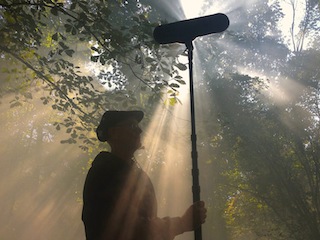 Sound technician Robert Maxfield just wrapped Season 4 of The Walking Dead and he says it’s one of the hardest shows he’s ever worked. On The Walking Dead, it is common to have to make quick cues between the numerous and spread out actors in various scenes. “We work outside a lot on this show,” he explains. “The actors are typically spaced far apart. The cameras, three on average, are usually spaced over a broad area and are placed at a great distance from the talent . . . many times throughout wooded forests. This requires that I be on a long ridged pole, that allows me to move quickly and precisely.”

“But what really makes booming The Walking Dead unique,” he continues “is that the actors roll around, run, shout, yell, fighting, whisper, snap their heads from one side to the other, kneel, bend over, and carry lots of props – guns, knives, backpacks, water, riot gear, etc. There are way more props than a normal television show.  Oh, and have I mentioned wardrobe?  We are faced with thick leather jackets, super thin tank tops, bare chests, riot gear, torn clothing, wool, polyester, etc.  And they are all covered with dirt, oil, water, grime, and yes….blood.  All of this movement, the sound level changes, invading props, and wardrobe issues, makes for potentially disastrous radio mic circumstances, and requires that I boom as much of the dialog as possible.”

Maxfield says his task is made a little easier because he utilizes his K-Tek 18-foot Klassic boom pole with a straight internal cable. “I chose this pole for my work because of its length, durability and rigidity,” he explains.

The internally straight-cabled K-Tek Klassic gives Maxfield the ability to make very quick moves from a long distance (16-feet to 18-feet) with quiet ease. And many times this movement is done on the move, either shifting sideways, forward, backward, or in a running manner.  It isn’t unusual for him, in one set up, to have to start booming from above, go to a side-lined angle, then swing down underneath. “The pole’s long sections, tight locking collars, and rigid construction allow me to get on target quickly and efficiently,” he explains. “We have a saying on The Walking Dead, “It’s a tough show - that’s what makes it great.”

There is a scene in this year’s season where Rick (Andy Lincoln) is confronted by the Governor (David Morrisey) at the prison fence line. “Rick was on one side of the fence, and the Governor was 50 feet away,” he explains. “We used the Governor’s radio mic and I had to boom Rick because he was going to run, fall to the ground, roll around a bus, turn over on his belly and start shooting. All while throwing scripted and un-scripted lines.”  He says, “Ad libbing is very common on this show! Whispering, then yelling is common on this show…heck, everything that is unexpected is common on this show!”

“The Steadicam operator framed a medium-wide shot over Rick’s shoulder to the Governor who was way up high on a tank,” he adds. “I was over the top on Rick, then he took off running backwards in such a way that I had to sideline him to keep out of the operator’s path and out of the high angle of the direct sunlight. Rick hit the ground shooting, and then rolled around the bus. I had to move laterally around to the other side of the operator. Then Rick rolled onto his belly and shot more. He then sat up and delivered some whispery dialog that required me to go back up over the top. He then shouted, so I had to raise the mic quickly.  Then the Governor appeared from around the bus, grabbed Rick and started beating him. I had to race around the operator and sideline the beating. It ended with the operator widening out and framing the on-coming troops and tank. The set-up happened very fast, was loaded with stunt movements, including a high angle direct lighting circumstance, and wide shots, tight shots, and rapid panning and tilting. This type of set up is quite common on our show, and requires above average boom pole maneuvering.”

Maxfield and his sound cohorts Michael Clark (Sound Mixer) and Utility Sound Dennis Sanborn loves the action on The Walking Dead, and says that even though it’s a difficult show - “The quality of the show, and the notoriety it gets, makes it all worth while!” Recently, the Cinema Audio Society nominated Michael Clark, the Re-Recording mixers, the ADR mixer, and the Foley Mixer for ‘Outstanding Mixing for a 1 Hour TV Series’.  Maxfield said, “This nomination is especially important to us because we were chosen by our sound peers!”  The winners will be announced at the awards ceremony in Los Angeles on February 22nd.  Now, with the show down for hiatus, they are bringing their teamwork – and equipment to a new AMC series Halt and Catch Fire.