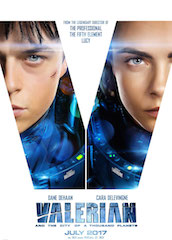 Éclair and EuropaCorp have announced that Luc Besson’s latest film, Valerian and the City of a Thousand Planets, will be available in ÉclairColor and in 2D in select cinemas in France July 26 and in Germany July 20, via Universum Films.

“We are delighted that spectators will be able to discover one of the most eagerly-awaited blockbusters of the year with our high dynamic range technology,” said Christophe Lacroix, senior vice-president of Éclair. “ÉclairColor provides exceptional image quality and increases the impression of being in the thick of the action. ÉclairColor enhances the spectacular effect of Valerian, with heightened contrast and a wider color range. It is also the first science-fiction film available in ÉclairColor and the 26th launched in France since January 1.”

"We are delighted to have been able to use ÉclairColor on this film. It is a considerable improvement in terms of image quality, brightness and color," said Agnès Berger-Sebenne, post-producer of the film. "It really has brought out the best in Valerian and the City of a Thousand Planets."

Maxime Rigaud, managing director of CinemaNext France said, "The advantages our technology provides are clearly visible to all – general audiences and professionals alike – and it is available at a very competitive price. ÉclairColor considerably improves the projection quality of 2D films and thus brings a new dimension to the movie-going experience. Cinemas can consistently project both ÉclairColor mastered content as well as standard content.”

Valerian and the City of a Thousand Planets is the new film by Luc Besson adapted from the science-fiction comic strip series by Pierre Christin and Jean-Claude Mézières that inspired a whole generation of artists, writers and filmmakers. In the 28th century, Valerian (Dane DeHaan) and Laureline (Cara Delevingne) are special spatio-temporal agents charged with keeping order throughout the human territories. On assignment from the Minister of Defense, the two undertake a mission to the extraordinary intergalactic city of Alpha, an ever-expanding metropolis where species from across the universe have converged over centuries to share knowledge, skills and culture. At the center of Alpha is hiding a mysterious dark force, which threatens the peaceful existence of the City of a Thousand Planets. Valerian and Laureline must race to identify the terrible threat and safeguard not just Alpha, but the future of the universe.

ÉclairColor is a revolutionary new technology combining the science of colours with the optimisation of select projection systems to achieve image projection of unprecedented quality. Brighter, sharper, with more depth of field, more density and more detail, the images produced by ÉclairColor technology have better contrast and greater fidelity, better reflecting the colour initially intended by the creative teams.