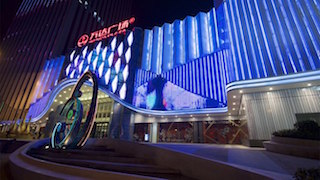 Wanda Cinema will open Dolby Cinema theatres in Asia in Dalian, Changchun, Chongqing, and Jinan, it was announced today. “We are transforming the movie experience in China with Wanda,” said Doug Darrow, senior vice president, cinema business group, Dolby Laboratories. “With powerful image and sound technologies and unique design, Dolby Cinema is one of the best places to see a movie. We look forward to captivating audiences in China who seek the very best quality in entertainment and to bringing Dolby Cinema to more cities with Wanda Cinema Line.”

“Wanda Cinema Line, as a leader and advocate of the latest cinema technologies in Asia and even around the world, is committed to providing premium moviegoing experiences and services to our audiences,” said John Zeng, president, Wanda Cinema Line. “Dolby Cinema is a complete experience. We are glad that, as the largest exhibitor in Asia, we can be the first to bring this experience to audiences.”

“Dolby Cinema gives artists the ability to fully capture and share their vision with audiences,” said Peter Loehr, CEO, Legendary East. “Warcraft is a prime example of the power and sophistication of Dolby Cinema. We are thrilled to bring this experience to audiences in China so they can enjoy the experience of being inside the story of Warcraft, living and fighting with the characters on screen.”

“Warcraft is a movie produced by Legendary Pictures and acquired by Wanda, and is the first Dolby Cinema title released in Asia. This shows that Wanda is not only collaborating with Dolby on the exhibition side, but also looks forward to more collaborations in movie production, so as to provide audiences with an unprecedented experience combining Wanda’s premium movie content with Dolby’s leading technologies in sight and sound,” Zeng added.

Dolby Cinema features the Dolby Vision laser projection system, which uses state-of-the-art optics and image processing to deliver high dynamic range with enhanced color technology and a contrast ratio that far exceeds that of any other image technology on the market today. The result is a richer, more detailed viewing experience that delivers strikingly vivid and realistic images and makes viewers feel like they are in the movie’s world.

Dolby Cinema also includes Dolby Atmos sound technology, which moves audio around the theatre, even overhead, with amazing richness and depth. The combination of Dolby technologies with the design and comfort of the Dolby Cinema makes audiences feel closer to the onscreen action.