CineLife Entertainment, a division of Spotlight Cinema Networks, today announced that it is releasing Chicago: America’s Hidden War to theatres across the U.S. May 12 through June 15. The revealing documentary dives into Chicago’s street violence and its effect on the community, presenting viewers with a path towards change. 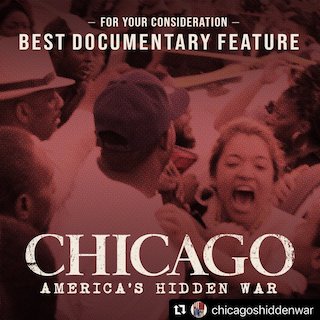 Directed by Daylight Supreme and produced by Dimas and Tiffany Salaberrios, Mark Shaw, John Shepard and Dr. A.R. Bernard with Miss Muffet, Six+One and Zash Studios, Chicago: America’s Hidden War pulls back the curtain to expose the pervasive genocidal-like behavior in Chicago, explain what birthed and contributed to this war, and why so little has been done to stop it.

Through interviews with Chicago civilians, the film explores how gun violence has permeated their homes and damaged their lives, and ultimately serves as an inspiration for a clear path toward change, presenting viewers with an action plan on how to get involved in creating a better future for the Chicago community.

Dimas Salaberrios’ previous credits include the critically acclaimed Emanuel, which tells the true story of the 2015 shooting at the Emanuel AME Church in Charleston, South Carolina.

“We are thrilled to be working with Dimas and Tiffany Salaberrios on bringing this crucial film to audiences across the U.S.,” said Bernadette McCabe, executive vice president of CineLife Entertainment. “Through bringing Chicago: America’s Hidden War to theatres, we hope to educate audiences across the country about the origins and consequences of gun violence and shed light on a subject of great importance that their direct communities may not be as familiar with yet.”

“Films have the power to shed light on untold stories and generate meaningful outcomes. For too long, violence in Chicago has been met with apathy and outrage alone is fruitless. This movie will help all Americans learn how to tackle the urgent crisis that is going on in America’s heartland and take actions to stop it, regardless of where they are from or how they are different,” said Dimas and Tiffany Salaberrios.