Barco Calls for an HDR Standard 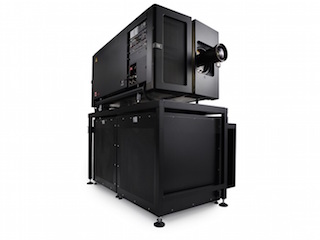 In ever increasing numbers, exhibitors around the world are making the transition to laser projection. In response to that, at CinemaCon 2017 Barco will unveil the DP4K-40LHC and 20LHC RGB Flagship, 6P 3D single chassis, integrated high contrast projectors to the American audience. But nowhere in the new projectors’ specs will you find the term high dynamic range, which, given their capabilities seems like an oversight. Barco has a specific explanation for this, namely that it believes the exhibition world needs an HDR standard.

Barco showed pro-type versions of these projectors in a private suite at last year’s CinemaCon and unveiled the production models later in 2016 at CineAsia. Exhibitors from North and South America will get to see the line for themselves next month in Las Vegas.

The 6P RGB LHC range doubles the contrast of the L-series flagship laser projectors to provide Premium Large Format screens with an even more significant improvement in image quality. Now you can choose between higher contrast or higher brightness within Barco's flagship laser cinema projector range.

Fully integrated, the DP4K-40LHC greatly reduces complexity. It not only frees you from all lamp-related costs and maintenance, thanks to the single projector setup you can also seamlessly integrate it into your current system. In this way, installing and operating the projector also becomes easier and downtime is reduced. What's more, if you already own a DP4K-60L flagship laser projector from Barco you can upgrade it to a high-contrast version.

Barco considered adding HDR to the specs for their new projectors and the company believes they will meet an HDR standard, once one is agreed upon. But they felt it would be misleading to use the term today.

“There is no official Hollywood, [Digital Cinema Initiative] definition of HDR,” said Bill Beck, whose official title at Barco is the laser guy. SMPTE’s currently working an HDR standard, as is the DCI. Meanwhile, Beck said, he and his counterparts at Christie, Sony and NEC wait.

Audio formats such as Auro 11.1 and Atmos have greatly improved the sound quality in movies and television. The Hollywood production community has fully embraced high dynamic range as necessary to ensure that the picture quality of their content matches the sound. But widespread acceptance of HDR has been slow to develop, especially in exhibition. Barco believes an HDR standard could help speed up acceptance of laser projectors.

The exhibition community in the past has balked at high dynamic range projectors largely because of the cost. That’s beginning to change as costs come down and as exhibitors continue getting repeat business from patrons who notice the difference that quality sound and picture can deliver in the movie going experience.

“Hollywood’s got to provide some guidance,” said Beck. “ACES is great,” he said, referring to the work the Academy of Motion Picture Arts and Science has done to develop the Academy Color Encoding System. “It’s good for moving images among displays and cameras. But it really does nothing for the exhibition community because it’s not DCI.”

For now benefits other than HDR are helping to advance laser projector sales, said Beck.  One major saving of the new projectors is that exhibitors avoid all lamp-related material, maintenance, and administrative costs. Thanks to its superior optical efficiency level, electrical costs are driven down as well, which can reduce your operating expenses.

“Getting rid of lamps is so compelling.” Barco now has fifteen laser projectors models, including several that incorporate laser phosphor. “The exhibitor can do [an all-laser theatre] cost effectively,” Beck said. “There’s an education process.”