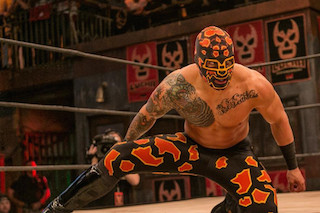 “Lucha Underground features non-stop, high-flying and hard-hitting action that makes it the ideal programming to showcase the state-of-the-art 4DX technology,” said El Rey Network president and general manager Daniel Tibbets.  “We pride ourselves on getting viewers as close to the action as possible and now they can actually feel as if they are in the ring.”

Ancient tradition, extraordinary athleticism, and a flare for theatrics combine in El Rey Network’s wrestling series, Lucha Underground. The riveting original introduces American audiences to the high-flying aerial maneuvers, slingshot moves, dramatic masks, intricate, rapid-fire combinations and distinctive wrestling techniques of lucha libre, one of Mexico’s most popular sports. Fans have a ringside seat as masked villains and heroes face off to battle for wrestling supremacy.  It provides enthusiastic viewers with an incredibly visceral and explosive experience with a focus on the artistry, originality, intense action and over-the-top characters that has come to define this phenomenal fan-favorite.

“From Hollywood blockbusters to more local fare, we have had the great privilege of showcasing premium content to 4DX fans around the globe for several years as the immersive format continues to grow in popularity,” said said Brandon Choi, COO, CJ 4DPlex Americas. “Today, we are thrilled to finally be able to showcase a TV series on the big screen, bringing Lucha Underground fans into the all-sensory 4DX action.”