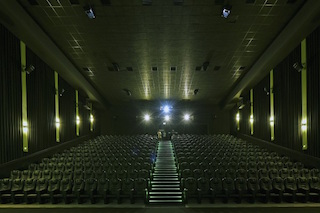 Scheduled to open this month, the cinema at Nu Metro Emperors Palace will boast a screen that’s almost three stories high – one of the largest curved, silver cinema screens in South Africa and will feature a Barco laser phosphor 4K Ultra HD projector. The theatre will also have the largest Dolby Atmos immersive audio system installed in Southern Africa.

“Nu Metro’s Xtreme cinemas showcase movies as the filmmakers intended for them to be experienced,” said Nitesh Matai, managing executive at Nu Metro Cinemas. “We have gone over and beyond the expected standards to source only the best and latest technology – from the best in screens, to advanced sound and digital projection – to give South Africans an opportunity to enjoy movies at the highest quality possible. With Xtreme, biggest is best! We are very excited about our complexes at Emperors Palace and Galleria joining the Nu Metro Xtreme-family – along with the six other Xtreme cinemas at Nu Metro nationwide.”

The JBL speakers being installed for Xtreme at Nu Metro Emperors Palace are tailor-made for large format-cinemas, with powerful digital amplifiers delivering sound of over 75kW.

The Nu Metro Galleria on the KZN South Coast is scheduled to open in July.