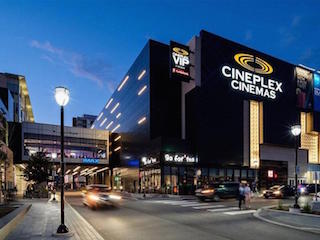 4DX's advanced theatre technology enhances the on-screen visuals of action-packed blockbusters, transcending the traditional cinema experience through special effects including motion-synchronized seats, wind, fog, rain, lightning, snow, bubbles, vibration and scents. The result is one of the most innovative cinema formats in the industry, drawing fans into the action on the big screen.

ScreenX is the world's first multi-projection theatre technology that allows a 270-degree panoramic movie watching experience. ScreenX allows the audience to go beyond the frame of the traditional movie screen, utilizing a proprietary system to expand the centre screen image to the side walls, surrounding audiences with imagery and providing the sense of being inside the movie.

"CJ 4DPlex's partnership with Cineplex has been instrumental in introducing our innovative 4DX and ScreenX technology to Canada and we are thrilled to continue our expansion," said CJ 4DPlex CEO JongRyul Kim. "Cineplex guests will love the 4DX experience with films from action blockbusters to horror, comedy and animation enhanced for a uniquely entertaining, immersive theatre-going experience. ScreenX is a visually immersive experience where genre films, along with action blockbusters and musicals benefit from the format's extra-wide panoramic view."

"As Cineplex continues to expand our movie-going options, we are excited to introduce these innovative experiences to more movie-lovers across the country," said Kevin Watts, senior vice president, exhibition, Cineplex. "4DX and ScreenX exemplify our commitment to providing guests with the latest cutting-edge cinema technologies and creating memorable experiences that cannot be replicated at home."